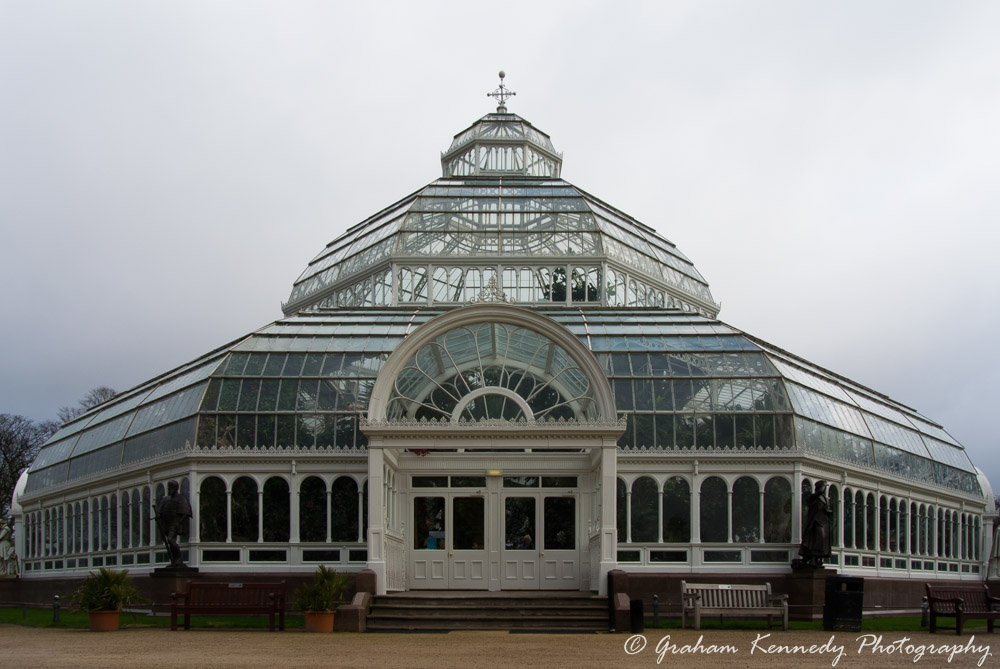 This is a Grade II* three-tier dome conservatory palm house designed and built by MacKenzie and Moncur of Edinburgh which opened in 1896. Liverpool millionaire Henry Yates Thompson (the great nephew of the founder of Princes Park) gifted £10,000 to the city to fund the construction. It was designed in the tradition of Joseph Paxton’s glass houses and was stocked originally with a rich collection of exotic plants.

During the Liverpool Blitz of May 1941 a bomb fell nearby and shattered the glass. It was reglazed in 1950 at a cost of £6,163 with costs covered by War Restoration funds. A period of decline and deterioration culminated in its closure in the 1980s on grounds of safety.
In June 1992, a public meeting was held highlighting the dereliction and calling for restoration. A petition was presented to the City Council by what had become the “Save the Palm House” campaign. A public fund raising campaign was established, with a “sponsor a pane” programme generating over £35,000. This led directly to the conversion of Save the Palm House into a registered charity (Friends of Sefton Park Palm House). The Palm House was partially repaired and reopened in 1993. It was fully restored at a cost of £3.5 million with Heritage Lottery and European funding and reopened in September 2001. It is now both a popular visitor attraction offering free and paid-for public entertainment and is venue for hire.
The eight ‘corners’ of the Palm House are marked by statues by the French sculptor Léon-Joseph Chavalliaud. These include explorers Captain Cook, Christopher Columbus, navigators Gerardus Mercator and Henry the Navigator, botanists and explorers Charles Darwin, Carl Linnaeus and John Parkinson and landscape architect Andre le Notre. Inside the Palm House are two sculptures by Benjamin Edward Spence “Highland Mary” and “The Angel’s Whisper”.

The grounds of the Palm House feature a statue of Peter Pan which was one of the last works by the British sculptor Sir George Frampton. This is Grade II listed and is a replica of a similar statue given as a gift for the visiting public to Kensington Gardens by author J.M. Barrie. The statue was donated to the park by George Audley in 1928 and was unveiled in the presence of Barrie. It originally sat in Sefton Park but was damaged in the 1990s. It was restored at Liverpool’s Conservation Centre, and returned to the more secure location of the Palm House’s grounds in December 2005.